The PANDA project at FAIR is being designed and built by a large international collaboration (more than 50 institutes worldwide). Our group in Uppsala is one of the main contributors to the project. Currently on-going activities of the Uppsala PANDA group comprise:

The planned proton-antiproton measurements at PANDA aim for a luminosity of 2x1032 cm-2s-1, which will be achieved with an antiproton beam and a high density internal proton target.
Possible as internal targets are, a very intense cluster-jet that could reach densities of 1x1015 atoms/cm2, and for higher densities well above 1015 atoms/cm2, a beam of frozen hydrogen droplets, so-called pellets. The requirements of a narrow target beam-pipe and acceptable vacuum conditions are major technical challenges here. Our group works on the pellet option. This technique has been employed successfully at the WASA experiment, for which this target concept was invented in Uppsala, with both hydrogen and deuterium pellets. Further developments of the pellet target technique, such that it can be employed at PANDA, are also done in Moscow and Jülich. At the Uppsala Pellet Test Station (UPTS), studies of a PANDA-like vacuum system, including a beam dump and realistic pumping conditions were done during 2004-2005. Using the information from three vacuum gauges and comparing them with calculations give minimal dimensions on the pipes to be used at PANDA. This is crucial as the detectors have to be designed around those pipes and should cover as much as possible of the solid angle. A detailed description of the pellet target can be found in the Doctoral Thesis by Örjan Nordhage (see reports). The pellet option not only allows for high hydrogen target thicknesses, but gives also the possibility to have very well defined spatial parameters of individual target particles by using optical position measurements. An accurate knowledge of the pellet position is needed for studies e.g. of some Charmonium and Hyperon decays at PANDA. Such position information is also important for background rejection, and may be crucial for studies of rare reactions. A position resolution σ(x,y,z) ≤ 0.2 mm in interaction position is desirable for use in the event reconstruction. At the UPTS, we work on a so-called pellet tracking system based on lasers and fast line-scan (LS) (linear CCD) cameras for this purpose. It requires efficient detection and identification of individual pellets in a pellet stream of high intensity, typically 10k-20k pellets/second. The final goal is to be able to reconstruct the position for pellets that are in the accelerator beam region at the time of a hadron reaction event with the required accuracy. A description of pellet tracking and of a conceptual design for PANDA are given in the Milestone report for EC FP7 Hadron Physics2 WP19: “Design ideas for pellet tracking systems for PANDA and WASA” and the detailed design for PANDA is described in the Doctoral Thesis by Andrzej Pyszniak (see reports).

R&D for the electro-magnetic calorimeter

To achieve the physics goals of PANDA, the modular detector must have a good energy, timing and angular resolution for both charged particles and photons. As the full solid angle needs to be covered, the construction of the electromagnetic calorimeter (EMC) will not only be the most expensive but also the most technically challenging part of the detector.

The chosen detector material is PbWO4 (PWO) and it will be operated at -25° C to optimize the light yield, The Swedish groups participating in PANDA (Lund, KTH, Stockholm, Uppsala) have engaged in the realization of the forward endcap of the target EMC as the major Swedish contribution to PANDA with our group as coordinator. We have measured the response of PWO to low-energy photons with tagged photons at MAX-lab, Lund, and shown that the energy resolution is well within the specifications. 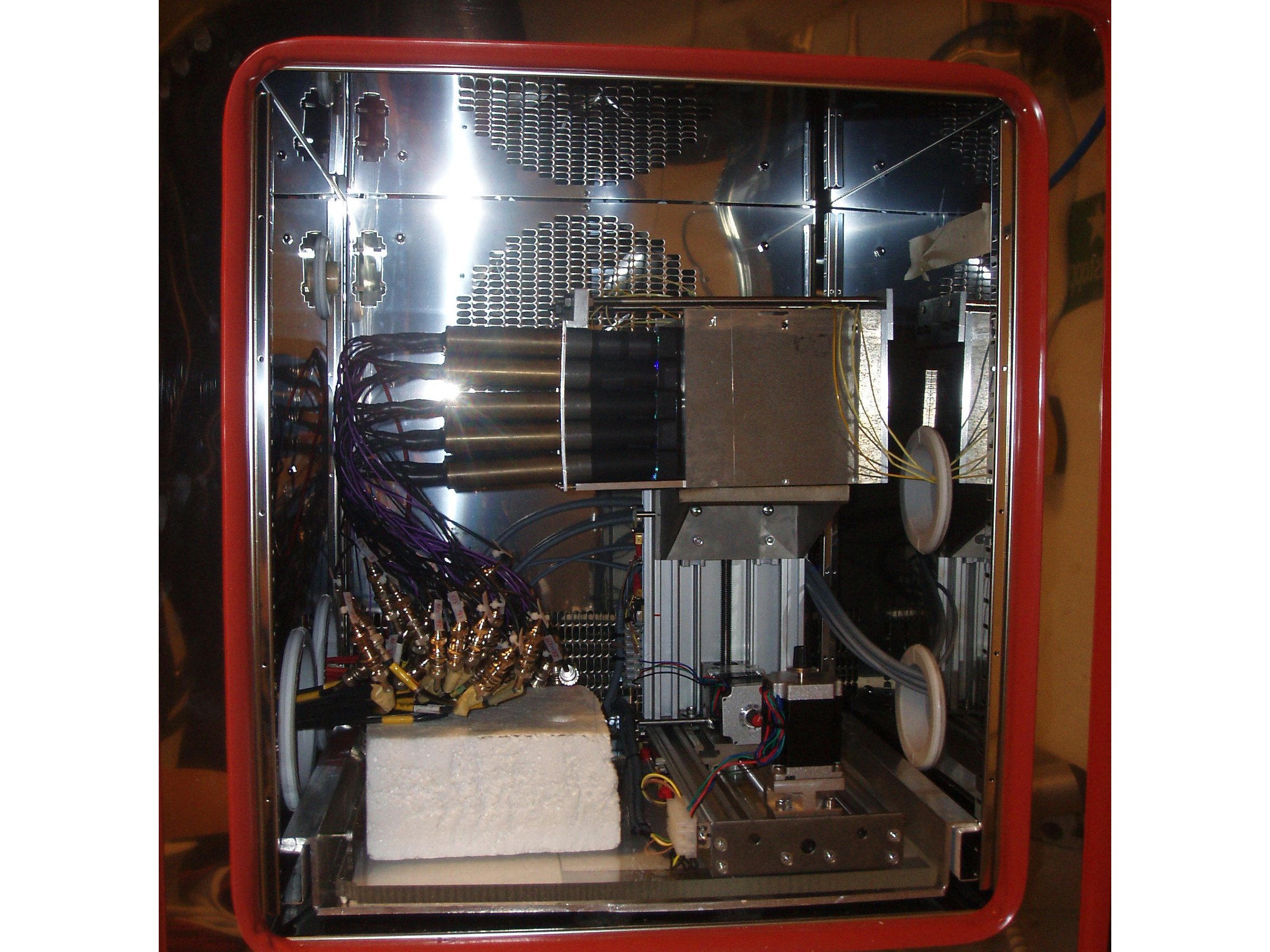 The photo shows a setup from the MAX-lab measurements, with a matrix of 25 PWO crystals inside a refrigerator. Previuos studies have been performed using beams at both KVI Groningen (NL) and MAMI Mainz (D), where the performance of several crystal types (PWO, BGO) and read-out devices (PMT, APD of different sizes) were studied. Tests of temperature dependence at intervals between -25° C to room temperature and investigations of how the energy resolution depends on the angle of the incoming beam (using arrays or single crystals) were also made. Please refer to Sophie Grape’s Doctoral Thesis and Frida Hjelm’s Master Thesis for more information (see reports).

Our group is also involved in the readout electronics for the EMC with responsibility for the signal digitizers (ADC’s). These ADC’s must be capable to measure photons ranging from a few MeV up to several GeV with high resolution. This together with insufficient space for cables makes it necessary to place them direct at the EMC. Channel density, power dissipation and exposure to radiation will therefore be challenges for the ADC design. We have built a 16 channel 125 MHz sampling ADC prototype for test purposes in order to optimize the final ADC development.

The device is equipped with a Field Programmable Logic Array (FPGA) and an optical transceiver and can serve as standalone test station for signal processing algorithms, optical data transfers and synchronization methods.

At high energies the strong force is well described by using quarks and gluons as degrees of freedom, while at lower energies hadronic degrees of freedom are more adequate. The PANDA energy regime is in the transition region between these two descriptions. The antiproton-proton → antiΥ-Υ reaction, where Υ denotes a hyperon, is a good testing ground for models based on these two alternative viewpoints. The weak decay of the hyperons gives direct access to spin degrees of freedom in their production process, which in turn, can be related to the role of spin in the creation of strangeness (or charm in the case of charmed hyperons). Furthermore, the exclusive production of hyperons and antihyperons in antiproton-proton collisions can be used for symmetry violation checks, such as CP and CPT invariance. We have done simulations to show that for the single strangeness hyperons PANDA will exceed the statistics from previous experiments in a very short time. PANDA will also get access to hyperons in the multistrange and charmed sector were no previous data exist. Please refer to Sophie Grape's Doctoral Thesis and the PANDA Physics Book for more information (see reports). 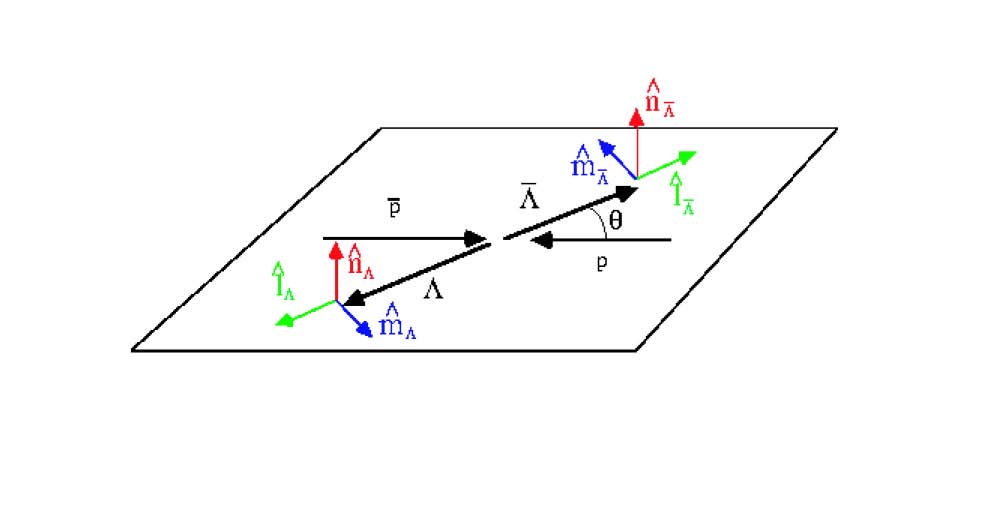 Apart from conventional hadrons, made from three quarks (baryons) and quark-antiquark pairs (mesons), QCD allows for other combinations of quarks to form particles. Furthermore, gluons may play a role in the structure of particles in so-called hybrids. Here, an excited gluon field contributes to the quantum number of the state in addition to the quarks.

Hadron states consisting of only gluons, glueballs, have been searched for but their identification is difficult in the light quark sector. An unambiguous identification of a glueball would bring very important information on the generation of the hadronic mass since it is entirely made from massless gluons. The charm quark mass region is favourable for such searches since systems with charmed quarks states are narrow and therefore new states more easily seen. We have simulated the detection capability of a spin-exotic charmonium hybrid in PANDA with encouraging results. Details can be found in Agnes Lundborg's Doctoral thesis and Elin Lundström's Master thesis (see reports).